The judge has the right to disqualify a fighter from a given fight if his protective gear is insufficient or in poor condition (rusty metal mesh). Weapons that fail the regulation measurments can also be a reason for disqualification.

The referee has the right, in justified conditions, allow a fighter to use a weapon which is fails the measurments specified by the rules ( e.g. heavier or with smaller hand protection). 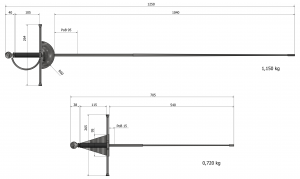 3. Refereeing a fight. The judge, the referees the main judge.

Each fight is refereed by three or five people. One of them plays the role of a judge, while the others are called referees. The judge has the following duties: he awards the hits, directs and supervises, halts and renews the bout. The referees’ role is to observe the fight and signal the hit. The fight is halted by the judge on his own accord or signalled by one of the referees ( by raising his or her hand or flag). The fight can also by halted by one of the referees or fighters (see p.7). In case of any doubts or debatable situations the decides on scoring the hit. The main judge is the only person that superintends the entire competition, settles debatable situations and decides about possible changes in the organisation of the competitions.

The entire body is a valid target. Only proper touches that cause a visible bending of the blade are considered to be scored hits.

The entire body is a valid target. Only proper touches that cause a visible bending of the blade are considered to be scored hits.

The entire body is a valid target. Both cuts and thrusts are scored. Sabre is considered conventional weapon and ?right of way? rules apply.

Both fighters start the fight with the set of 3 points (2 in case of rapier fights). Each time a fighter receives a hit, he or she loses one point. The fight continues until one of the fighters loses all his points. There are four possible outcomes of a fight:

A fighter can also lose a point without receiving a hit:

The fight is conluded if one of the fighters loses all three points he started with. The winer gains 2 points in his general competition classification, the loser gains no points.

If both fighters avoid combat and do not engage is a fight the referee may start a countdown after notyfying the fighters. If no hit is scored within the following 0 seconds both fighters are penalised by subtracting one point from their score. If the score reaches 0-0 the fight ends in a draw and both players gain no points in general classification.

First double touch means no points for both contestants. If a second double touch is ruled, the fight is considered concluded and both fighters lose 1 point from their general classification score. In the case of saber Primum Vivere rule apply (kind of right of way).

6. The course of the fight and the commands of the judges.

The fight can be halted in following cases:

A fighter has the right to stop a fight in any given moment ( in case of injury or damage to his equipment etc.), however, if the halt to a fight found to be unjustified, the judge has the right to penalize the fighter with loss of one point in a given fight. A referee can halt the fight in case of injury to one of the fighters, damage to the equipment or any other threat to fighters safety.

It is forbidden to:

It is allowed to:

9. Appealing to the decission of the judge